Invaders - Or How I Learned to Fail at Love and Revolution is a tabletop role playing game. At the most basic level, it's like a tabletop approach to video games such as XCOM, Silent Storm, and Jagged Alliance, but with a much greater focus on what the characters in those games do between missions.

Extraterrestrial Invaders have taken over your home, and it's up to you to build up a resistance movement to fight back and liberate your peoples, but how will you deal with the evolving politics and intrigue of your group as it swerves away from you and your ideals?

While you still get to send your squad out into the field, fight the baddies, liberate people and resources, and all that fun stuff, a large part of Invaders is about what happens back at headquarters. You'll spend a good deal of time getting to know your squadmates, getting caught up in the resistance group's politics and divergent ideologies, and trying to make the most our of a desperate situation. Make friends and enemies, fall in love then screw it all up, and get tied up in politics that test your own beliefs and ideologies.

What does it do?

While the game itself is still in development, the beta version of the character creation system is fleshed out enough to be shared here. Character creation in Invaders is a simple and quick process that has the player answering a series of questions about different aspects of their lives. It follows their history across multiple "life phases" going from birth, through their adolescents and adulthood, all the way to the moment when the Invaders first came.

The system includes an element of chance, where a player chooses what their character set out to do, but the dice determine the outcome of that decision. Players will still have plenty of say over how it all works out though.

As these life phase questions are answered, characters pick up traits, modifiers, relationships, and history which will be used in game.

Invaders is heavily inspired and influenced by a handful of games and game design philosophies. Powered by the Apocalypse games, Forged in the Dark games, Belonging Outside Belonging games, Mobile Frame Zero: Firebrands, and a little bit of Traveler and Stars Without Number all helped shape Invaders. Without these games and philosophies, Invaders could not exist. 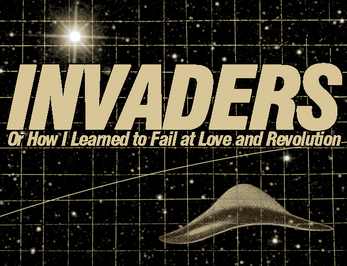